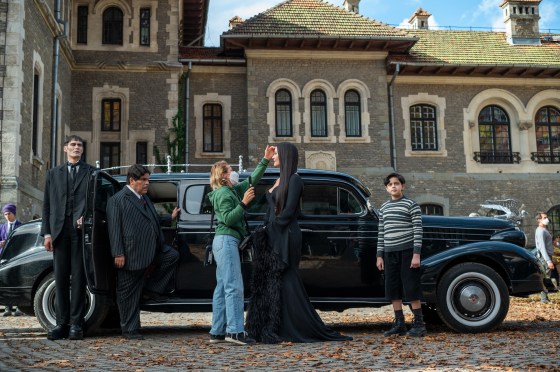 In 1993’s Addams Family Values, Wednesday Addams (Christina Ricci) has been sent away to summer camp, and she is not happy about it. To make matters worse, the camp counselors have written a Thanksgiving-themed play in which they are forcing her to participate, cast as Pocahontas. Wednesday’s nemesis, the obnoxiously chipper Amanda Buckman (Mercedes McNab), stars as the “beautiful and kindly pilgrim lady” Sarah Miller, who has invited Pocahontas’ tribe to the supposed first Thanksgiving. At the last second, Wednesday breaks from the script.

“Wait,” she says, deadpan. “We cannot break bread with you.”
[time-brightcove not-tgx=”true”]

“You have taken the land which is rightfully ours,” she continues. “Years from now, my people will be forced to live in mobile homes on reservations. Your people will wear cardigans and drink highballs. We will sell our bracelets by the roadsides. You will play golf and enjoy hot hors d’oeuvres. My people will have pain and degradation. Your people will have stick shifts. The gods of my tribe have spoken. They have said, ‘Do not trust the pilgrims—especially Sarah Miller.’”

With that, she declares that she will scalp the pilgrims and destroy their village. All hell breaks loose as members of Pocahontas’ tribe of misfits run amok, setting the pilgrim village ablaze.

This iconic scene—seared into the cultural memory (of millennials, at least) although its stereotypes have aged poorly—epitomizes Wednesday Addams’ acerbic sense of justice. And it inspired Miles Milar and Al Gough, the showrunners behind Wednesday, the Netflix horror-comedy series starring Jenna Ortega which is out on Nov. 23. The show is the latest take on a family that first appeared in New Yorker cartoons in 1938, followed by the beloved ‘60s TV show and the ‘90s adaptations starring Ricci, Anjelica Huston, Raúl Julia, and Christopher Lloyd.

“People know her from …read more