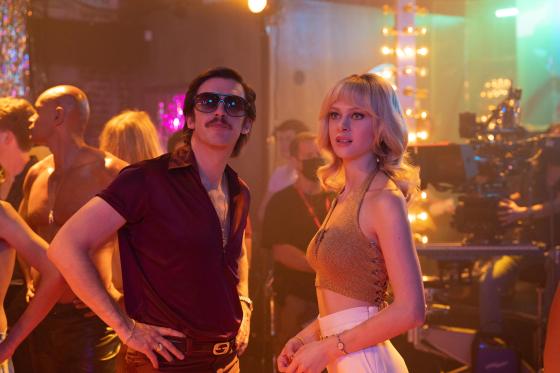 Erin Simkin—HuluDan Stevens and Nicola Peltz in Welcome to Chippendales

Welcome to Chippendales has all the elements of a great workplace comedy—a charismatic cast, offbeat characters, an unconventional setting. But the show, premiering Nov. 22 on Hulu, is actually a true-crime docudrama based on a book called Deadly Dance: The Chippendales Murders by K. Scott Macdonald and Patrick MontesDeOca. That complicates things, resulting in a romp through 1980s L.A. nightlife that makes you feel a bit guilty for enjoying it so much.

For those who didn’t live through that era or catch one of two recent documentary series (discovery+’s Curse of the Chippendales and A&E’s Secrets of the Chippendales Murders) or the acclaimed podcast on the pioneering all-male strip club for women, the story begins with Somen Banerjee. When we meet him, Somen, an Indian immigrant played as an ambitious yet quietly tortured soul by Kumail Nanjiani, is working the register at a Southern California gas station convenience store, where racist customers steal beer and make fun of his name. Offered a promotion to manage a chain of stations, he demurs. It turns out that by socking away a remarkable 90% of his meager income, Somen has amassed enough savings to buy his own business, a backgammon club in West L.A. He christens it Destiny II—to imply that there’s already a successful Destiny I somewhere—and gives himself a new name as well: Steve.
[time-brightcove not-tgx=”true”]

Erin Simkin—HuluDan Stevens and Nicola Peltz in Welcome to Chippendales

At first, the bar sits mostly empty. When the seemingly well-connected promoter Paul Snider (Dan Stevens) walks in one night with his Playboy Playmate wife Dorothy Stratten (Nicola Peltz), a flailing, cash-strapped Steve promises him a 25% stake in the business in exchange for getting celebrities to visit the club. Paul quickly turns out to be a fraud—and, tragically, worse. But before their acrimonious parting, …read more