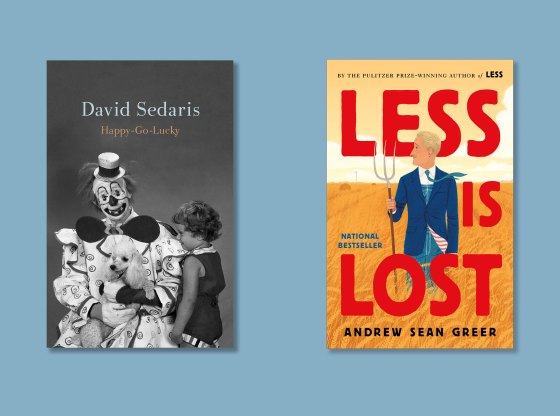 Though Andrew Sean Greer and David Sedaris met fairly recently—after Greer reviewed Sedaris’ book The Best of Me in 2021—they already banter like old pals, each fighting to land the last laugh. The authors share a lot in common: they are both celebrated for humorous writing that slyly examines humanity and for making cutting observations about the world in which we live. They also love to shop. The beginning of their friendship included a New York City shopping excursion. “Andy will try on anything,” Sedaris says. Greer raises the stakes: “Everything!”

Another thing these two authors have in common: each has traveled extensively throughout the U.S. Greer’s new novel Less Is Lost, a sequel to his Pulitzer Prize-winning 2017 novel Less, out now, follows the successful but awkward novelist Arthur Less on a road trip across the country. Greer himself spent time on the road to research what such a trip might entail—and found himself traversing communes, visiting dive bars, and sporting wraparound sunglasses in an attempt to blend in with locals. (The last one didn’t work, and his novel’s protagonist goes through a similar snafu.) These moments and more coalesce into a laughter-packed narrative about writing, privilege, and loss.
[time-brightcove not-tgx=”true”]

Reflections on similar themes can be found in Sedaris’ latest essay collection, Happy-Go-Lucky, which was published in May. In it, Sedaris described his experiences grappling with the pandemic, a multi-city book tour, and the death of his father. While his book is a nonfiction and Greer’s is a novel, both explore what it means to be a person in America and how to cope with loss, all through a comedic lens.

Read More: The 5 Funniest Books Ever

In an international phone conversation, Greer calling in from San Francisco and Sedaris from his country home …read more