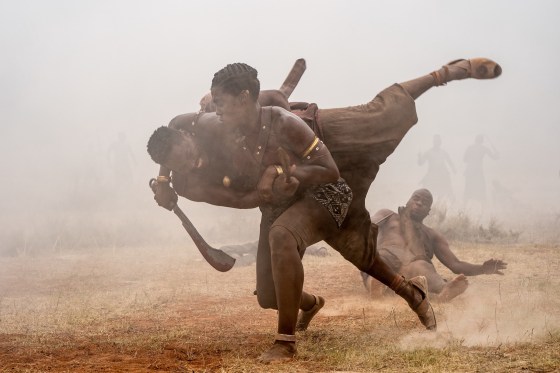 Yet as wise and respected Nanisca she is, she’s plagued by personal demons that she has kept secret from nearly every one of her sister soldiers. The arrival of a ball-of-fire new recruit, Nawi (played, wonderfully, by Thuso Mbedu, of The Underground Railroad), rattles her composure further. Davis, unsurprisingly, is terrific at balancing Nanisca’s blazing confidence with her gnawing self-doubt, though another actor comes close to stealing the show: As Izogie, the soldier in charge of training the young aspiring warriors, Lashana Lynch doesn’t so much stride through the movie as whirl her way through it, often on a cloud of wit. Her heavy eyebrows frame her mischievous eyes like a hovering cloud; she’s like a gorgeous, Amazonian Groucho. In a scene where she explains to Nawi how she strives to find just the right stone to sharpen her machete, she also proffers her magnificently pointed talons as an auxiliary weapon, excellent for plucking out eyeballs. Nawi is deeply impressed, even as she flinches. This is a manicure you don’t want to mess with.

We’ve become so conditioned by years of watching men fight men onscreen—jabbing with spears, blamming with guns, high-kicking the daylights out of each other with a mighty oof—that, the Amazons of the Wonder Woman movies notwithstanding, it’s a novelty to see women going at it. That’s just one of the pleasures of Gina Prince-Bythewood’s history-based adventure epic The Woman King, starring Viola Davis as the general of an all-woman army. The setting is the real-life West African kingdom of 19th century Dahomey, which boasted a fearsome female military force known as the Agojie. Though screenwriter Dana Stevens, working from a story by Maria Bello, has taken some liberties with historical facts, these warrior women really did exist, and as depicted in the movie, Dahomey did traffic slaves, selling its captives of war to European slave traders, thus bulking up its riches and bolstering its power. But if the film’s historical underpinnings are fascinating, it works beautifully on a mythical level as well: it’s exhilarating to watch these women fighting possibly even more fearlessly than men do, even as they navigate the complications of living within their own close-knit society. This is an action spectacle with a beating heart.

Davis plays Nanisca, and our first glimpse of her and her troops in the opening scene is a magnificent one: as they’re set to attack an enemy encampment, Nanisca rises from a field of grassy cover, her eyes resolute as a tiger’s; the other women pop up around her, silently, though you can almost hear their nerves whirring. The battle sequence that follows is sharp and concise, a cyclone of sinewy limbs and blazing machetes that’s part stylized interpretive dance, part traditional fight choreography. Just to watch these women move is galvanizing.