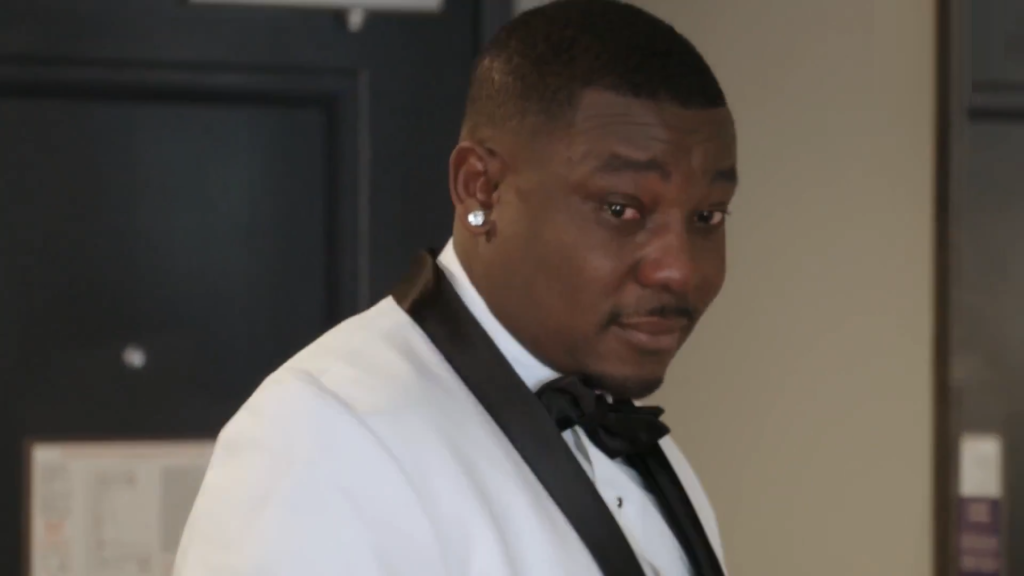 The night before the wedding, Kobe Blaise blew up at Emily Bieberly.

After his recent alarming revelations, she wanted to know if he had any more surprises for her. He was mad.

On the day of the wedding itself, however, Kobe is on the verge of a breakdown.

Emily is pregnant. She doesn’t want anyone to know. He feels like he has to tell her parents.

In this sneak peek ahead of the Sunday, August 7 episode, Kobe Blaise is already in his tux.

The minutes are counting down before he marries Emily.

Alongside producers and camera crew, his imminent father-in-law, David Bieberly, is keeping him company.

Both men have tears in their eyes.

This is a momentous occasion in their lives.

But Kobe also has one lingering issue. He feels like keeping Emily’s secret is betraying his future in-laws.

Adorably, he starts crying, so overcome with emotion and declaring how “cute” Koban is (he’s right). Emily tears up in response. It’s very sweet. All the while, Emily’s parents are there, but they clearly want to stay on the sidelines and not make this beautiful meeting about them.

“It kinda hit me this morning that Emily is getting married,” David explains to the cameras.

“So it’s a big deal, because I had a lot of serious doubts before Kobe came to America,” he admits.

“But he sent me a letter telling me how much he loved Emily,” David explains.

They’re a very chill pair, but they of course support Emily continuing to breastfeed her son, because it’s her choice and because it’s good for him. When Kobe tried to claim that it was disrespectful (whatever that means) of Emily to feed her son or pump milk in front of her dad, he gently shot him down, explaining that he doesn’t have an issue with it — it’s a natural part of having a …read more