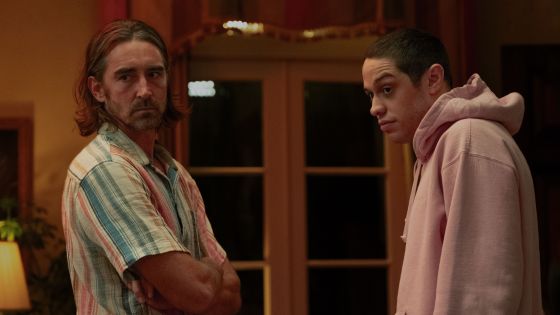 One of the great pleasures of summer is the purely enjoyable, disposable horror movie, one that comes with no pretention of being “elevated”—a term that demeans the overall genre, anyway. Bodies Bodies Bodies—the English-language debut of Dutch filmmaker Halina Reijn, written by playwright Sarah DeLappe, from a story by Kristen Roupenian, of “Cat Person” fame—takes a while to get going, and its intentionally ambling dialogue sometimes makes the pacing a little creaky. But the picture—in which a group of friends gather at a remote mansion to party through a hurricane—has a clear sense of humor about itself and its intended audience. That’s ostensibly Gen Z, though it could also include you and me. The movie doesn’t try to explain a whole generation, but it’s sympathetic to the realities of young people trying to make their way in the world right now. It also features a kicker so enormously, stupidly satisfying that I found myself laughing about it on the subway ride home.

Sophie (Amandla Stenberg, of The Hate U Give) and Bee (Maria Bakalova, of Borat Subsequent Moviefilm) are a couple newly, or perhaps only possibly, in love; they’re introduced to us in a tender, dreamy opening that captures both the thrill and the uncertainty of getting started as a twosome. Those feelings are intensified, especially for Bee, when the two arrive at the party they’ve been planning to attend, hosted by Sophie’s childhood best friend, super-rich kid David (Pete Davidson), at his family’s gated compound. It turns out Sophie hasn’t told anyone in this small group of friends that she was coming. She also hasn’t told them that she’s recently sober. When she arrives, with Bee in tow, they’re frolicking, pre-storm, in David’s giant family pool. In their wet swimsuits and dripping hair, they castigate …read more