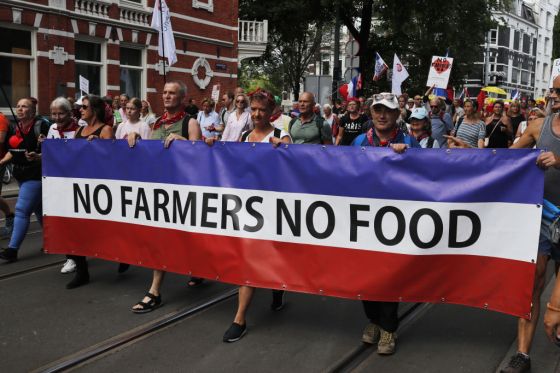 A standoff between Dutch farmers and their government is causing havoc in the Netherlands this summer. Protesters have withheld deliveries from grocery stores, smeared manure outside the home of the agriculture minister, and blocked highways with hay bales and tires. “That’s what you get when you make people so very angry,” Sieta van Keimpema, secretary of the Farmers Defense Force (FDF), said July 27 as the group launched a fresh round of demonstrations.

What’s driving the dispute? Manure. The Netherlands’ intensive livestock farming system produces an unusual excess of animal feces. When mixed with urine, those feces give off ammonia and nitrous oxide. The former is a pollutant that can leak into air and water, harming local wildlife. The latter is a potent greenhouse gas that traps heat in our atmosphere: the Intergovernmental Panel on Climate Change says nitrous oxide accounts for around 6% of global greenhouse gas emissions.
[time-brightcove not-tgx=”true”]

In June, the Netherlands unveiled a world-leading target to halve emissions of the gasses, as well as other nitrogen compounds that come from fertilizers, by 2030, to tackle their environmental and climate impacts. The government said it was leading an “unavoidable transition” for agriculture. Farmers can reduce the release of nitrogen compounds by changing how they manage their cows: feeding them less protein, or using water to dilute manure, for example. But the target is expected to require a 30% reduction in overall livestock numbers, and experts say many farms will have to shut down. Farmers are demanding that the government rethink the plan before it becomes law later this year.

Trienke Elshof, a dairy farmer with 250 cows in the northern province of Friesland, says farmers feel unfairly targeted, because other high-polluting industries, such as aviation, construction, and transport, have yet to face …read more