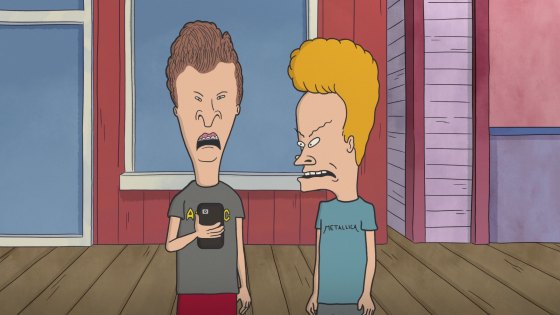 There was something else: it seemed sort of transgressive, or at least a lazy pleasure, to partake of this smart-dumb show while slouched on the sofa at home. These characters seemed to belong there, thriving denizens of that thing our dads used to call the idiot box. To step out of your living room to see these characters blown up larger than life felt like a betrayal of their couch-potato kingdom. But now that so many of us

The question swirling around Beavis and Butt-Head Do the Universe, Mike Judge’s movie-length resurrection of his mid-1990s MTV slacker sensation Beavis and Butt-Head, is “Can Beavis and Butt-Head still be funny today, now that we have ostensibly evolved to be a more sensitive culture?” The answer is that Beavis and Butt-Head—bored, unattractive teenage boys perpetually in search of getting laid, a goal that will surely elude them for all eternity—are still funny. It’s we who have gotten less funny, both more cautious about laughing at things we shouldn’t and more demanding that our humor come with a side order of redeeming intelligence. No wonder we’re miserable.
[time-brightcove not-tgx=”true”]

To be fair, in 2022 we live in a miserable world; some days it feels impossible to find anything to laugh at. But maybe that’s why the oafish naivete of Beavis and Butt-Head feels more like a salve than a throwback. Following is only a partial list of things that happen in Beavis and Butt-head Do the Universe: Beavis and Butt-Head set their high-school gym on fire during a science fair, are chosen to be blasted into space thanks to their fixation with certain repetitive gestures, and encounter versions of themselves from a future dimension, superior beings (though it’s all relative) who look very much like the Beavis and Butt-Head we know, except they shimmer along in Grecian-style togas and dispense wisdom, of sorts, without snickering. The whole plot is set in motion by a “lady” astronaut named Serena (Andrea Savage), who, the guys believe, has offered to have sex with them. It also involves both interplanetary and time travel. As Beavis muses when he’s introduced to the concept of the wormhole, “I always wondered how worms score.”