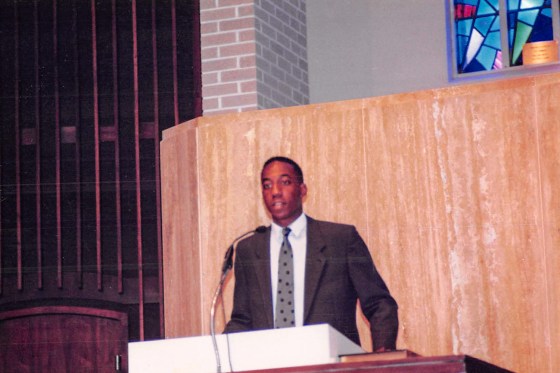 We are gathered on the veranda of the Morehouse president’s grand home for a reception following graduation in May, where Warnock has just delivered the commencement address and received an honorary degree. The well-dressed crowd has accessorized to indicate their various affiliations—alumni pins, silk scarves in sorority colors, panama hats signaling graduation years. Kids, clad in their Sunday best, drink fruit punch carelessly, as the grown folks hum along with R&B oldies, queueing for the carving stations and -paella bar. Hall smiles, noting, without being explicit, that this setting and the occasion are evidence of a prophecy fulfilled.

Warnock doesn’t speak of himself in such lofty terms. Instead, he demonstrates humility, joking with the graduating class that he arrived at college penniless as his father quoted Acts 3:6: “‘Silver and gold, I have none.’” Warnock remembers lamenting to the dean of the chapel that “I don’t have but one suit.” He recalls the other students driving “fine cars.” He delivers this memory with the wry amusement of remembering his childish preoccupations.

Sitting in the audience, I am reminded of the first time I heard Warnock speak. The year was 1987, and we were college freshmen. I was a student at Spelman College, the historically Black women’s college that is so close to Morehouse that the schools share a parking lot. Warnock was chosen to represent his class, and delivered an address in what I always think of as the Morehouse manner—-passionate, syncopated, and polysyllabic. Would I say that we knew even then that he was destined for prominence? Yes, but with an asterisk. At Morehouse and Spelman, we believed all our classmates would change the world.

There is nothing not to like about his story. His new memoir,

Raphael Warnock understands himself as a man born of a mighty lineage that he regards a “moral tradition.” He begins with his father, a self-taught metal worker, collecting cast-off vehicles, disassembling them, and selling them for parts. Recalling his father’s ingenuity, the Senator’s voice soars with an emotion that is easily recognized as awe, tinged with great respect. “He would create these mechanisms. He would literally draw the thing on a piece of paper and think it through. He was putting these things together to load up these old junk cars … To take care of his family. A way out of no way.”

Warnock has self-consciously followed in the steps of the African American men who changed America. He often quips that although he was born the year after Martin Luther King Jr.’s death, it was King himself who recruited Warnock to Morehouse College, a historically Black men’s college from which he would graduate in 1991. Shortly after Warnock’s 2021 Senate victory, he mentioned this on a congratulatory Zoom call with about 100 of his former classmates. The declaration was received with some good-natured ribbing. Had they not all been drawn to Morehouse by the college’s most illustrious alumnus? But for Warnock, the affinity was different. His older sister Joyce Coleman Hall recalls that her younger brother began reciting King’s sermons when he was only 5 or 6 years old: “He quoted them with such sincerity, with weight in his voice. Waving his little hands.”