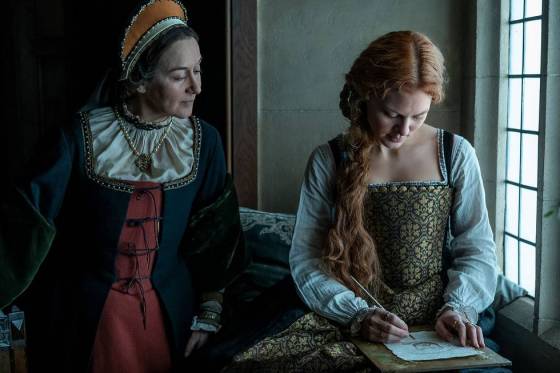 Finding the voice of Queen Elizabeth I

To find the voices of Elizabeth (played by Alicia von Rittberg) and the other royals, Reiss read lots of letters and speeches from the era. She recalls that one note from Edward Seymour, the Duke of Somerset who served as his nephew King Edward VI’s head of state, to the Royal Army in Scotland really unlocked these characters for her. “He kept saying, ‘Stop making decisions without me, you have to consult me! I am the one ruling England not you!’ Then he’d write back a week later. ‘Stop asking me stupid questions. Can’t you guys take any initiative!’” she says. “I just kind of went, ‘Oh, I know that guy.’ I’d worked with a guy like that. And suddenly these people became very real to me.” She even found herself taking lines straight from the Duke of Somerset’s letters and using them on the show. Her favorite is his comment to his brother, Thomas Seymour, in episode 1: “We weren’t made to marry princesses.”

It took Reiss a bit longer to get into Elizabeth’s head. “There is something a bit enigmatic and ambiguous about what is going on with her,” she says. “I think that’s why we’re drawn to her.” It wasn’t until she started to think back to her own teenage experience that she began to understand what Elizabeth was going through. “I just kind of went, What was I like when I was 14?” Reiss says. “She’s the first character I had to inject the most of myself into. I think she unlocked something in me that just kind of made everything about her make more sense.”

Becoming Elizabeth focuses on exploring the young future queen’s relationship with the older Sir Thomas Seymour, brother of her dad’s third wife, Jane Seymour, and the uncle of King Edward VI, who went on to marry Henry’s fourth and final wife, Catherine Parr. Elizabeth and Seymour were said to have had a romantic affair while the future queen lived with Catherine, who became Elizabeth’s guardian after the King’s death. On the show, Thomas is often seen hopping into Elizabeth’s bed, tickling her, and undressing her in front of the royal servants—all of which was documented in letters Reiss had read in preparation for the show. The inappropriate relationship between the teen and the man 25 years her senior was one of the things that drew Reiss to this story.

“I always thought this was a story about being groomed told through the eyes of the person who is being groomed,” she says. “Too many women have had a relationship where you thought you were in control and then you look back and you go, ‘Oh, that wasn’t what it was at all.’” She wanted to tell this story for an audience that is well aware of the power imbalance at play here, but also find themselves being charmed by Thomas (portrayed by a horribly good Tom Cullen). “You kind of have to fall in love with him a little bit before you understand what’s going on,” she says. “This way the relationship grows with you as she grows up.” Many historians believe Elizabeth’s experience with Thomas, who was executed for treason by his own brother after trying to marry the young royal, was the reason The Virgin Queen never married.

Catherine Parr (played by Jessica Raine) was the sixth and final wife of King Henry VIII, and the Queen Consort of England and Ireland. Over the course of her four-year marriage to Henry VIII, she became very close to Elizabeth, and was personally involved in her education. Considering their close relationship, Reiss wanted to portray Catherine with love and show just how smart she was, while also being skilled at using her feminine charms to get ahead. The real Catherine Parr became the first woman to publish a work under her own name, 1545’s Prayers or Meditations, which was later used in the development of the

The Starz series Becoming Elizabeth centers on the teenage years of Queen Elizabeth I. To the surprise of show creator Anya Reiss, this era was one aspect of the English monarch’s life and historic 45-year reign that hadn’t yet been covered to excess by Hollywood. “Those are formative years of her life. Her understanding of the world comes from this time,” the British playwright and screenwriter tells TIME. “Seeing how Elizabeth helped shape the world, we should know what helped her understand it.”

Becoming Elizabeth, airing Sundays, delves into the real-life royal drama that played out following the death of Elizabeth’s absentee father, King Henry VIII, and his decision to name his first surviving and only legitimate son, nine-year-old Edward VI, heir to the throne. Many in the royal court saw the petulant boy’s youth and inexperience as an opportunity to assert their power over the monarchy, while others saw it as a chance to choose their fighter in this battle for royal supremacy. Even Elizabeth, who was only 14 when her dad passed away, made power moves that were intended to put her in good favor with her half-brother, although some of those decisions put her at odds with her older half-sister, Mary, who became queen following Edward’s death at the age of 15.

Becoming Elizabeth may be full of royal politicking, but at its heart, the eight-episode series is really a character-driven family drama (think Game of Thrones if written by Sofia Coppola). Reiss says Becoming Elizabeth is a period drama for those who don’t usually like period dramas. “I actually don’t tend to watch them myself,” she says, “so I think I was trying to make a period show that I would watch.” To do that, she wanted to …read more