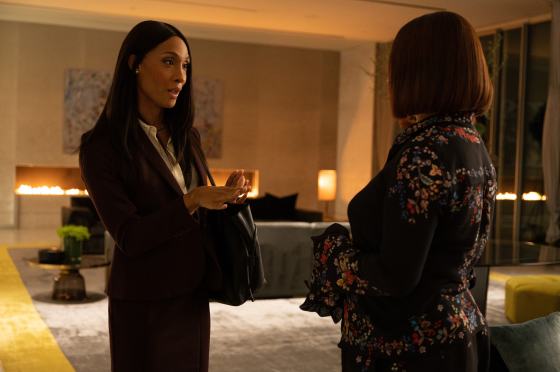 By the end of the premiere, Loot has become an upbeat workplace sitcom in the mold of Parks and Recreation (where Yang got his start) and Apple’s megahit Ted Lasso. The ensemble is strong: Fire Island breakout

Maya Rudolph is the kind of star you build a show around. A warm, charismatic performer who has jokingly described herself as a “2 3⁄4 threat,” the SNL alum has pipes that can belt out “Purple Rain” and win Emmys for voicing Big Mouth’s Connie the Hormone Monstress. She also has a gift for physical comedy. Who could forget her Bridesmaids character sinking into the street, frothy white gown billowing around her, face registering every phase of humiliation as a wave of food poisoning hit?

Yet it’s still bafflingly rare to see Rudolph, a household name who played a God-like figure in The Good Place and an Oprah-like figure in Up All Night, in leading roles. One notable exception was 2018’s Forever, a philosophically ambitious afterlife dramedy that cast her and Fred Armisen as dead spouses working through unfinished business in the Great Beyond. Now, Rudolph has re-teamed with its creators, Alan Yang and Matt Hubbard, on Loot, an Apple TV+ comedy premiering June 24, about the jilted wife of a multibillionaire. Unfortunately, it’s a much safer and more conventional show than its predecessor.
[time-brightcove not-tgx=”true”]

When we meet Rudolph’s Molly Wells, she’s swanning around on her new megayacht with her tech-mogul husband, John Novak (Adam Scott in toxic-nerd mode). That same day, she discovers he’s cheating with a woman half his age (Dylan Gelula). “I have been by your side for 20 years,” Molly screeches at him, incandescent with rage, in front of a crowd at her own birthday party. “I had sex with you when you had your weird body—before you fixed it with money!”

The divorce leaves her with $87 billion, and after a rebound tour that’s more dance-drink-drugs than eat-pray-love, she’s summoned to the offices of her foundation by its executive …read more