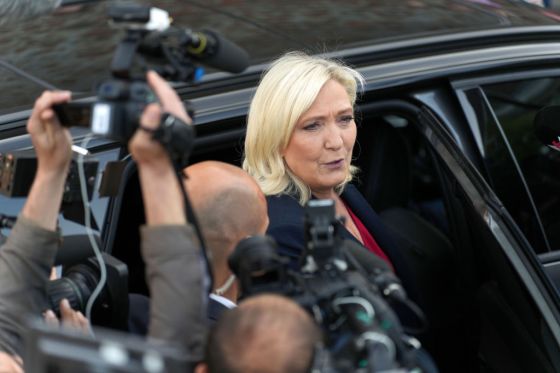 PARIS, France — President Emmanuel Macron made history in the French legislative elections Sunday, just not in the way he hoped.

After his reelection in April, most observers expected Macron to get an outright majority in parliament, as presidents have for decades. Instead, Macron failed to reach the 289-seat threshold, even if his alliance remains the largest bloc.

That means that while Macron may be able to keep control of the executive branch, he will have a hard time passing legislation, putting much of his agenda in peril — including plans to increase the retirement age and deliver tax reforms.
[time-brightcove not-tgx=”true”]

“This situation is a risk for our country given the challenges we are facing both nationally and internationally,” Prime Minister Elisabeth Borne said. “The right compromises must be built to act for France.”

Macron’s group won 245 seats. The second-largest group in parliament is Nupes, a leftist coalition led by Jean-Luc Melenchon, which gets 131 lawmakers. The far-right National Rally led by Marine Le Pen fared much better than expected with 89 seats, while the center-right Republicans and their allies took 61.

The president’s cabinet will also be shuffled. Three ministers failed to be elected and officials in Macron’s office have previously said anyone in that position would have to relinquish their jobs. Ecology Minister Amelie de Montchalin said Sunday night that she would leave the government.

France’s current political system, known as the Fifth Republic, was set up by Charles de Gaulle in 1958 to avoid the disruptions from a parliamentary system that couldn’t create a stable majority. Socialist Michel Rocard, for instance, headed a government in the late 1980s that fell short of an outright majority.