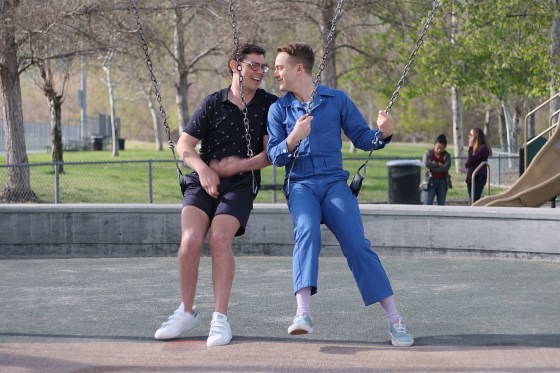 NetflixRyan O’Connell as Ryan Hayes and Max Jenkins as Tanner in “Special.”

Sign up for More to the Story, TIME’s weekly entertainment newsletter, to get the context you need for the pop culture you love.

“Why do I do this to myself?” is something I mutter every time I’m standing naked while a makeup artist paints over the zits on my butt. After writing and starring in my autobiographical Netflix show Special and now, Peacock’s reboot of Queer as Folk—two TV shows with plenty of sex—this happens more often than you’d think. Why am I so obsessed with gay sex? Why do I feel the need to get naked in front of a room full of strangers? Why have I written a sex scene where I get faux-penetrated by a literal model? These are the kind of questions that float through my brain while I’m filming a sex scene. And it’s not just the medium of television that’s being terrorized by my gay smut. My debut novel, Just by Looking at Him, opens up with the line, “My boyfriend Gus has a beautiful penis.” And then proceeds to describe said beautiful penis in graphic detail.

Here’s how I can make sense of it: I write things that will act as a balm for a younger version of me. When I wrote a scene in Season 2 of Special where my boyfriend defecates on me during intercourse (can I write that sentence in TIME?), I was writing that scene for 17-year-old me, who lost his virginity and actually did sh-t on his boyfriend in the process. (Oh no. TIME is trying to escort me off the premises.) Mortified, I tried to Google “anal sex accident” but it was 2004—the era of Ask Jeeves—and Jeeves could not or WOULD NOT go there. I remember thinking that something was wrong with me, that perhaps this had to do with my cerebral palsy and I wasn’t able to have sex like the rest of …read more