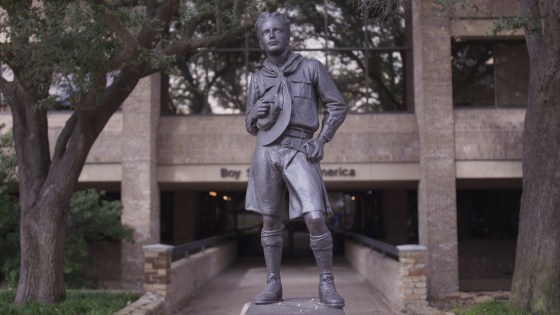 For more than a century, the Boy Scouts were a bastion of archetypal American iconography and values. “It’s apple pie, it’s baseball, it’s mom, it’s Fourth of July, it’s the American flag, it’s Norman Rockwell, it’s everything” says journalist and former scout Nigel Jaquiss in the new Hulu documentary Leave No Trace. Then in February of 2020, Boy Scouts of America (BSA) filed for bankruptcy in response to sexual abuse claims levied by more than 82,000 former scouts. It was a decisive blow to the organization, which was revealed to have been systematically covering up the abuse of the children in its care throughout its existence.
[time-brightcove not-tgx=”true”]

Directed by Peabody and Emmy-winning, Oscar-nominated journalist Irene Taylor, Leave No Trace showcases the devastating consequences of unchecked sexual abuse in BSA through interviews with five survivors who were abused during their time as scouts, as well as archival footage, and a meticulous recounting of BSA’s history. The documentary also demonstrates the staggering scale and timeline of the organization’s coordinated cover-up effort through interviews with lawyers, historians, experts, and current and former BSA executives.

As the safety of children in the United States is imperiled by everything from formula shortages, to discriminatory and medically dubious legislation, to the ceaseless epidemic of gun violence, Leave No Trace is a timely indictment of the wreckage wrought by institutional disregard for the suffering of children.

A history of powerful allies

The Boy Scouts of America was founded in 1910 in response to fears that increasing urbanization and industrialization would produce a generation of men who were out of touch with nature and insufficiently hardy. The organization had powerful early allies, including Presidents Teddy Roosevelt, William Howard Taft, and Woodrow Wilson, famed Americana artist Norman Rockwell, and the Mormon Church. As its membership grew, BSA used …read more