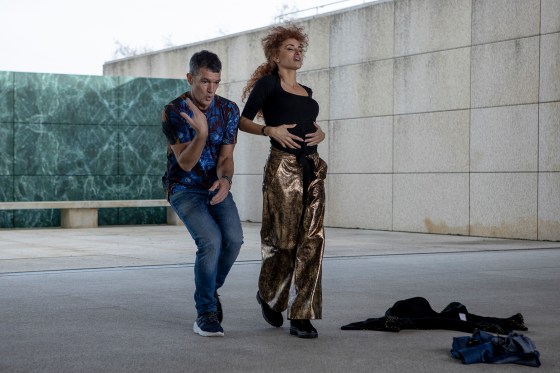 Penélope Cruz is a marvelous dramatic actor, but we don’t get enough chances to bask in the glow of her lustrous comic timing. She never clamps down on a line; her rhythms have the whirring lightness of a hummingbird wing.

That’s what makes the sharp, witty Spanish-Argentine film Official Competition, directed by Mariano Cohn and Gastón Duprat, such a rare treat. Cruz stars as eccentric but exceedingly focused filmmaker Lola Cuevas, who’s hired by a restless billionaire to direct an adaptation of a high-falutin prize-winning novel about warring brothers. Her idea is to cast two temperamentally opposite actors in the leading roles: Iván (Oscar Martínez) is a snooty intellectual who thinks most projects are beneath him. Félix (Antonio Banderas) is a flashy, award-winning international superstar, though the big one—the Oscar—seems eternally elusive.
[time-brightcove not-tgx=”true”]

Lola thinks she can harness the tension between these two galoots for dramatic effect, but their mutual animosity, evident on their first meeting, only intensifies as the shooting date draws near. When Iván, getting into the groove of his character’s rage, tosses a chair Félix’s way, it grazes his forehead, resulting in a pinkie-fingernail-size scratch. Félix howls bloody murder, and the war is on.

All three actors are clearly having a blast with this satire of actorly egos and vanity projects, but it’s Cruz who truly dazzles. As Lola, her diminutive stature topped off by a wily mass of no-nonsense red curls, she’s an oddball dynamo who’s also the smartest person in the room. (The character appears to be partially modeled, with an affectionate wink, on Argentine filmmaker Lucrecia Martel.) In the movie’s most outlandish scene, Lola inflicts comically extreme psychological torture upon her two stars after having bound them together with yards of …read more