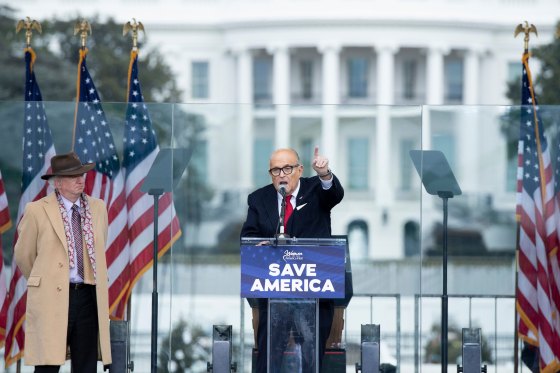 So far, no lawmakers or government officials have been charged, nor is there evidence that any are targets of the DOJ investigation.

One of the challenges prosecutors face is untangling criminal behavior from constitutionally protected political protests.

“If the speech is likely and intended to incite imminent criminal action, then it’s not protected,” says Elie Honig, a former federal and New Jersey state prosecutor. But, he notes, there’s a difference between someone saying “We need to throw these bums out” and “Let’s go in there, smash up the windows, and beat the crap out of the first representative we see.”

“So it’s a spectrum between those two poles,” he adds. “There’s no automatic formula for that. It ultimately comes down to the prosecutor’s judgment and what the prosecutor believes would be convincing to the jury.”

The lawyer who advised former President Donald Trump on how to overturn the 2020 election requested a pardon from him in the days after Jan. 6, the committee investigating the Capitol attack revealed on Thursday.

At the committee’s third public hearing on June 16, law professor John Eastman emailed Trump’s personal lawyer, Rudy Giuliani, asking for executive clemency. “I’ve decided that I should be on the pardon list, if that is still in the works,” he wrote, according to an email obtained by the House panel.

The revelation came a week after Rep. Liz Cheney, the vice chair of the panel, alleged that “multiple” Republicans in Congress had also requested pardons from Trump before he left office for their roles in trying to block the transfer of power to Joe Biden. She only mentioned one lawmaker by name: Rep. Scott Perry of Pennsylvania.
[time-brightcove not-tgx=”true”]

“As you will see, Rep. Perry contacted the White House in the weeks after Jan. 6 to seek a presidential pardon,” said Cheney, a Wyoming Republican. “Multiple other Republican congressmen also sought presidential pardons for their roles in attempting to overturn the 2020 election.” (Perry quickly denied ever seeking a pardon, calling it an “absolute, shameful, and soulless lie.”)

The mentions of presidential pardons have set off a whirlwind of speculation on Capitol Hill about which members of Congress might have sought pardons and why. Committee members plan to flesh out what they have learned about the pardon requests in an upcoming hearing. Legal experts say such pardon requests could be construed as demonstrating a consciousness of guilt or recognition that they might have committed a crime by the members who sought them. Less damningly, their entreaties could also reflect concern that they feared unfairly becoming targets of investigation or prosecution.