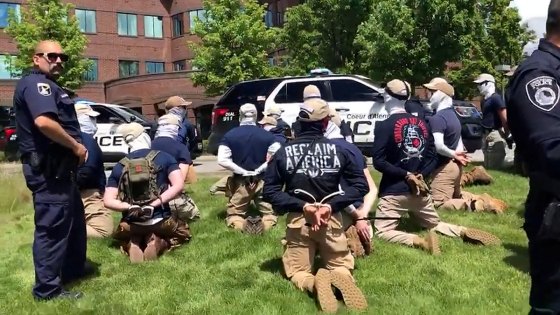 Panda Dulce was just about to begin her Drag Queen Story Hour on Saturday in San Lorenzo, Calif., when a group of eight to 10 men marched into the library yelling homophobic and transphobic slurs. When the men arrived—including one wearing a shirt with an image of an AK-47 that said “kill yr local pedophile”—everyone else fell silent, she said.

“They called me a groomer, a pedophile, a tranny, an ‘it,’” Panda Dulce said in a statement shared with TIME. “My heart hammered. I had a complete freeze response.”

Law enforcement responded quickly, no one was hurt, and the Alameda County Sheriff’s Office is now investigating the men, who were identified as members of the far-right Proud Boys organization, for their role in a potential hate crime. But the incident left the LGBT community in San Lorenzo shaken. It was not alone.
[time-brightcove not-tgx=”true”]

At least 11 different LGBTQ Pride events across the United States have been disrupted by right-wing protesters or delayed due to threats of violence in the past two months, according to research by TIME and the progressive media watchdog group Media Matters. Those numbers reflect a “step up in aggressive activity targeting LGBTQ people,” compared to recent history, according to Peter Montgomery, a senior fellow with Right Wing Watch, a project by the progressive group People For the American Way.

In addition to the San Lorenzo event, at least two other events put on by the nonprofit Drag Queen Storytelling Hour—which hosts kids’ storytelling hours with drag queens across the country—have been disrupted so far this June. On May 11, the same day as the San Lorenzo incident, 31 men believed to be linked to the white nationalist group Patriot Front were arrested in Coeur d’Alene, Idaho, for conspiracy to riot at a nearby Pride event.

While thousands of …read more