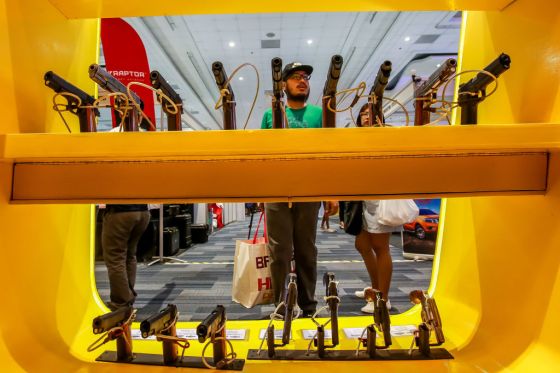 Gun culture in the Philippines

While the right to bear arms isn’t enshrined in the nation’s constitution, as it is in the United States, there is no denying the Philippine love of guns.

When the U.S. colonized the Philippines in the early 1900s, private citizens were allowed to own high-powered guns for

Mass shootings are a result of a confluence of factors, but at the heart of the problem are guns—of which the Philippines has plenty. Firearms are sold openly in malls, and almost anyone can carry them, even priests and accountants.

Fixers can reportedly take care of formalities standing in the way of gun ownership, such as drug and psychological tests, and there are estimated to be some four million firearms in the nation of 110 million people. Hundreds of thousands of weapons are illegally owned. Poverty, corruption, crime, and outgoing President Rodrigo Duterte’s brutal war on drugs have left deep social scars.
[time-brightcove not-tgx=”true”]

No consensus has been reached in the Philippines over what sets a mass shooting apart from other gun deaths, but indiscriminate slayings are uncommon. When eight people died and 11 were injured after a drunk gunman began firing wildly in the southern province of Cavite back in 2013, the tragedy was notable for its sheer rarity.

To be clear, homicides involving firearms are a fact of life in the Philippines. Hitmen can be hired for as little as $300. In fact, the Philippines is one of the deadliest places in Asia when it comes to firearm homicides. The country saw over 1,200 intentional killings using firearms in 2019. This meant guns killed one in every 100,000 people in the Southeast Asian country—one of the highest rates in Asia. (In 2020, the comparable figure for the U.S. is four.)

From the Archives: Inside Rodrigo Duterte’s Drug War

Elections can be particularly bloody times, with lethal attacks on poll officers and political rivals. One of the country’s worst killings, the 2009 Maguindanao massacre of 58 people, took place during a gubernatorial election. But it was a political atrocity. Shootings …read more