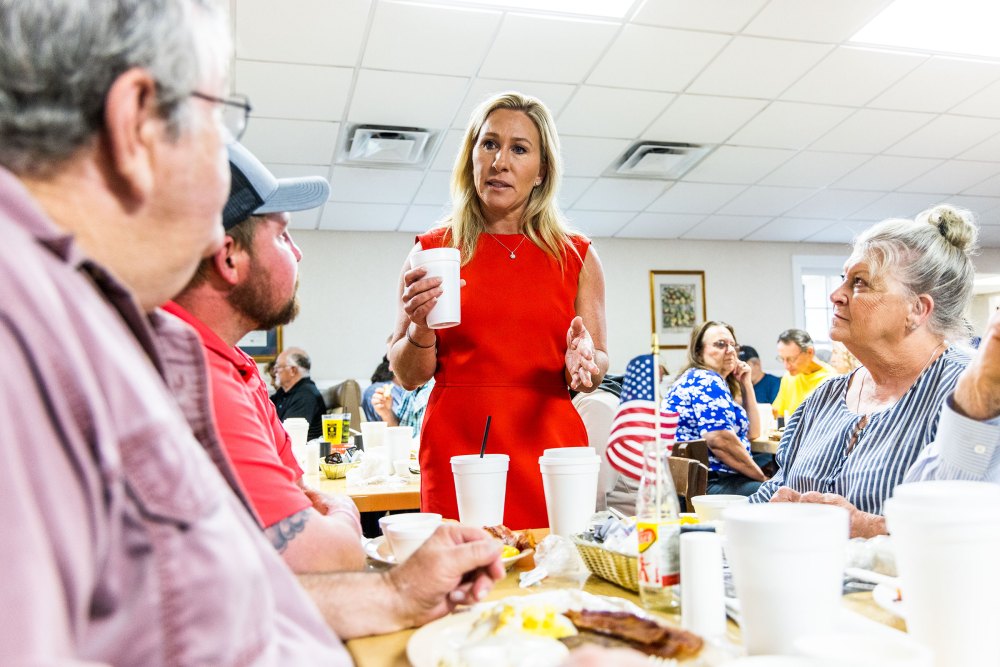 Greene speaks with supporters at Linda’s Place in Rockmart, Ga.

The morning fog rises from the red clay of Northwest Georgia, and the rolling green landscape is saturated with Greene’s large white vinyl campaign signs. FLOOD THE POLLS! they say on top, in red, and SAVE AMERICA, STOP COMMUNISM! on the bottom. When she first ran for Congress two years ago, Greene will later explain, the signs said STOP SOCIALISM instead. That was before she got to Washington, met the Democrats, and decided that what she was up against was far worse than she had even imagined.

There’s a HELP WANTED sign on the front door of Linda’s Place, a metal-roofed one-story building on the side of Highway 278 that’s packed full for breakfast as the sun begins to rise. A whiteboard advertises a fish-and-cheese sandwich and homemade peach cobbler. Greene steps out of a black GMC SUV in a red sleeveless dress that shows off her CrossFit-toned biceps.

The interior of the diner is a single giant room lined with blue leatherette booths. As Greene goes from table to table, a man with long gray hair holds up one of her bumper stickers. “IMPEACH BIDEN – MTG4America.com,” it says.

Greene gives him a thumbs-up. “Yes sir, I’m tryin’!” she says. “We’ve got to get the rest of the Republicans on board with me. They don’t want to rock the boat.”

“They do not respect our faith in God,” Greene says. “They do not respect traditional values. They do not respect freedom. And they look down on all of us. They think they’re smarter than we are.” Liberals, Greene says, think anyone who doesn’t agree with them on climate change and socialized medicine must just not be educated enough. “If you don’t like migrants coming across the border, you’re a bad person—that’s how they treat us.”

“And they’re taking everyone’s rights away with the Second Amendment, or trying to,” Bramlett says.

“Oh, yeah, well, shame on you for supporting gun rights—you’re a white supremacist,” Greene responds as she moves to the next booth. Table after table, the diners praise her and thank her and encourage her to keep up the fight.

SOMEWHERE BETWEEN ROME AND TRION, GEORGIA

“Well, first of all, it wasn’t my idea,” Marjorie Taylor Greene says brightly to the group of reporters. The polarizing Georgia congresswoman is perched on a seat near the front of a 15-seat minibus packed with the hated mainstream media, and we’re all trying to figure out why. Despite having invited us here, Greene herself doesn’t seem to know.

It’s unclear to us—a dozen journalists for local Georgia media, a right-wing streaming service, and TIME—what Greene stands to gain from this unprecedented encounter. It’s not to increase her visibility: after just a year and a half in Congress, her name ID eclipses that of politicians who’ve been in Washington for decades. Nor does she need a boost in the polls: a few weeks hence, she’ll win her primary by more than 50 points. Normally, Greene only talks to Fox News and its even-further-right counterparts—friendly interviews in which her outrageous statements are unlikely to be challenged. Last year, a local reporter who tried to question Greene at a town hall was kicked out and threatened with arrest.
[time-brightcove not-tgx=”true”]

But on this warm May day, she’s made an exception, dragging a troop of us out on the campaign trail for a 14-hour tour with eight stops across her rural Northwest Georgia district. Meeting the press, Greene tells us, was the brainchild of her communications director, Nick Dyer. “He brought the idea to me, and I thought about it, and I said, ‘I’d like to give the press an opportunity to see what we do each day,’” she says. “To talk to people and hear about what they think about me, compared to the things that are said about me.”

Many things are said about Greene in D.C. People call her hateful, crazy, toxic, a clown. Nancy Mace, …read more