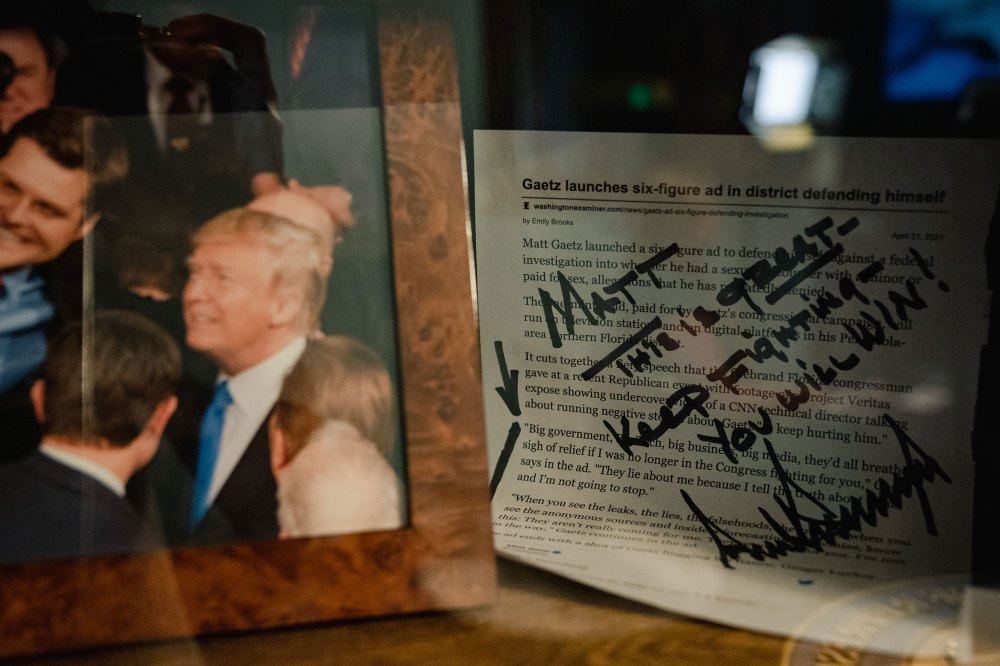 Gaetz believes his podcast to be Congress’s first-ever live-streamed simulcast, and sees it as an example of the innovative ways he’s working to get his message out. “They had to mention us by name to talk about how irrelevant we are,” Gaetz continues gleefully. “They love talking about the irrelevant people on the Sunday shows.” As Greene cackles at the irony, three-two-one the recording begins, and Gaetz introduces his guest, “the unbeatable, unstoppable Marjorie Taylor Greene.”

Gaetz plays the Sunday-show clips. Appearing on Fox News Sunday, GOP political operative Karl Rove had dismissed the idea that McCarthy faced significant internal opposition. “There may be a few dissidents of the sort of Matt Gaetz-Marjorie Taylor Greene wing of the party, which seems to consist of basically two people,” Rove sniffed, mispronouncing the former’s name as “gites” instead of “gates.”

Gaetz turns to Greene to get her take on this statement. “I want to tell you about Karl Rove,” she says, her syrupy Southern accent suddenly clipped and serious. “Karl Rove’s wing of the party is the failure part of our party.” It was this wing of the GOP, she says, that “led us into never-ending foreign wars,” needlessly killing American troops and leaving others to struggle with injuries, post-traumatic stress disorder and drug addiction. “Their wing of the party has led us to this massive debt the American people are in,” Greene says. “Their wing of the party sent our jobs overseas. Their wing of the party is the complete failure that exists here in this town, Matt, and nobody cares what Karl Rove has to say. Everyone cares about what you have to say. People care about what I have to say. People care about what Donald J. Trump, the 45th President of the United States, has to say.”

On a Tuesday afternoon in late April, Representative Marjorie Taylor Greene walks into the seventh-floor congressional office belonging to Representative Matt Gaetz, settles into a high-backed black leather chair, and fits a pair of headphones over her blonde hair. The taping is about to begin for the 38th episode of Gaetz’s “Firebrand” podcast, and Greene is the high-wattage guest star.

Greene has come straight from Dulles Airport, so Gaetz takes a minute to catch her up on today’s topics before the recording starts. There is much to discuss: the latest Anthony Fauci-related controversy; Greene’s trip to the U.S.-Mexico border; the five hours Greene recently spent testifying before a Georgia administrative judge that she should not be deemed an insurrectionist and tossed off the congressional ballot. “And then, of course, I’m going to go into our favorite subject,” Gaetz tells his colleague. “How the Republican Party is being led, and how it should be led.”

“Oh boy,” Greene chuckles. “I just got here from the airport! And Matt’s like, let’s start ’er off, and let’s torch the news cycle.”

Torching the news cycle is what Gaetz and Greene love to do. They are constantly in the headlines for their attention-getting antics, outrages and feuds. The pair have defended the Jan. 6 rioters, promoted countless conspiracy theories, hobnobbed with white nationalists and picked fights with colleagues on both sides of the aisle. Their own Republican colleagues have called them “unserious,” clowns, bigots, and worse. The humorist Dave Barry called them “Trump’s inner circle of trusted wack jobs.”

Gaetz and Greene are the ringleaders of the GOP’s most hard-core, pro-Trump congressional faction. The MAGA Squad, as you might call them, is not a formal caucus, but its numbers are …read more