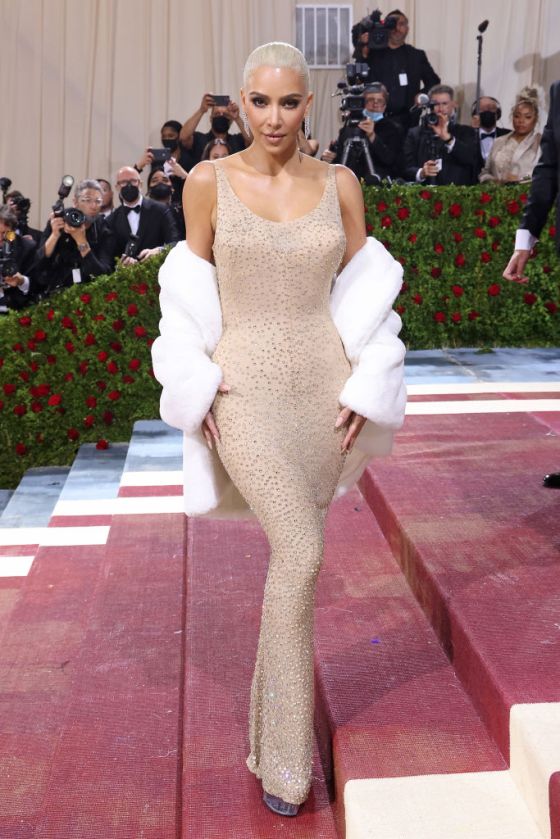 Kim Kardashian paid homage to one of the most iconic moments in American pop culture history at the 2022 Met Gala on Monday when she donned the same dress Marilyn Monroe famously wore to sing “Happy Birthday” to President John F. Kennedy in 1962. The dress, a flesh-colored, figure-hugging column gown inspired by a Bob Mackie sketch for costume designer Jean-Louis, is covered in rhinestones and caused a sensation when Monroe revealed it, seemingly nude, after shedding her white fur to sing a sultry rendition of “Happy Birthday” to JFK at Madison Square Garden in front of an audience of nearly 15,000.
[time-brightcove not-tgx=”true”]

For Kardashian, this iconic glittering look was perfect for fashion’s biggest night, especially since the gala’s theme this year was Gilded Glamour. “What’s the most American thing you can think of? And that’s Marilyn Monroe,” Kardashian said in an interview about the dress with Vogue. “For me, the most Marilyn Monroe moment is when she sang ‘Happy Birthday,’ to JFK, it was that look.”

The night’s theme was inspired by the Metropolitan Museum of Art’s 2022 Costume Institute exhibit, In America: An Anthology of Fashion. Procuring Monroe’s original dress was no easy feat, however. To do it, Kardashian reached out to Ripley’s Believe It or Not Museum in Orlando, who bought the dress in 2016 in a $4.8 million sale that still holds the record for being the most expensive dress ever sold at auction.

Since the dress is such a precious part of history, plenty of precaution was taken as well. As the dress traveled, it was handled by guards and gloves. It couldn’t be altered, so Kardashian said she lost 16 pounds to fit into it. And on the night of the …read more