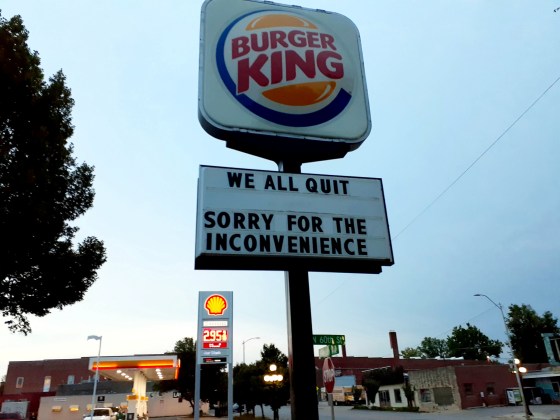 Rachael Flores—SWNSStaff at a Burger King in Lincoln, Nebraska announced their resignations on the sign outside the restaurant.

Employers are being forced to raise wages and offer perks like college tuition and signing bonuses. What economists call the reservation wage for people without a college degree—the lowest pay people are willing to accept to take a job—rose 26% in March compared with the same time last year.

It’s too soon to tell if this is just a characteristic of an economy suddenly reopening and leaving employers scrambling for workers, or whether these changes will be permanent. There were signs, however, that workers were losing patience with years of low pay even before the pandemic. The rock-bottom unemployment rate—in November 2019 it hit 3.5%, the lowest in decades—gave them confidence to start pushing back.

In 2019, there were more work stoppages involving 1,000 or more employees than in any other year since 2001. The federal minimum wage is just $7.25 an hour, and 20 states have not increased their minimum wage beyond that. All other states have either tied the minimum wage to inflation, which ensures it will keep rising as prices do, or increased it.

Xue Vang had long known that his job deicing planes, loading bags and chocking wheels at the Missoula airport was dangerous, especially in the Montana winter, when blinding snow and rain obscure the spinning engines that can suck in a human body.

But this past winter, the conditions at Unifi, which services planes for United and Delta, became intolerable. Because of the pandemic, understaffing was so bad that Vang was simultaneously handling two or three planes on the “ramp,” or tarmac, while making sure new trainees didn’t get inhaled into the engines.

One day, Vang’s colleague Jared Bonney was complaining that he’d been promised a raise for years that never materialized. “I was like, ‘Join the club,’” Vang recalls. Bonney’s pay was capped at $10.40 an hour; Vang, whose job was more senior, was capped at $11.50. Single adults would need to make $14.13 an hour to support themselves in Missoula, according to MIT’s living-wage calculator.

Other Unifi workers started sharing complaints about low pay, lousy conditions and broken promises of raises, even though their jobs required specialized training and were critical to flight safety. A walkout could get them fired—Unifi was not unionized—and plans for one three years earlier had fizzled. But in April, when Bonney says a Unifi HR manager called the workers “unskilled” and undeserving of more money, getting fired didn’t seem so bad. Not when Panda Express and Taco Bell were posting job openings starting around $14 an hour.

“It was just a boiling point for me,” says Bonney, 25, who couldn’t save money after paying his bills— even while living with his parents.

Rebecca Stumpf for TIME Jared Bonney, 25 Location: Missoula, Mont. Used to earn $10.40 an hour working outdoors on the tarmac servicing planes at the Missoula airport; now is an assistant manager at …read more