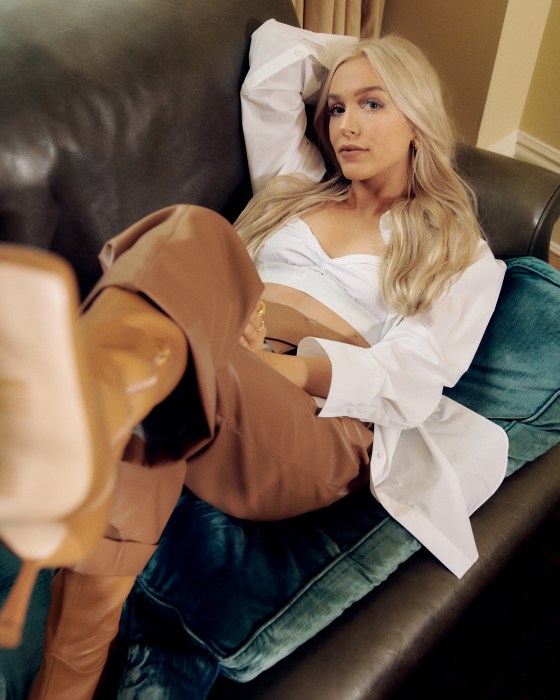 Call Her Daddy began in 2018 as a two-woman show: Cooper and her then roommate Sofia Franklyn would swap raunchy stories and offer up judgment-free counsel to both men and women. They’d advise someone on how to catch a cheater and advise a cheater on how to get away with an affair. The podcast shot from 12,000 downloads to 2 million in just the first two months.

Then, last year, their friendship and business partnership went up in flames during a contract renegotiation with Barstool Sports, the media company that previously hosted Call Her Daddy. The details, even for diehard members of the Daddy Gang, are murky. Both women believed they weren’t being paid enough. Both believed that was at least in part because they were women. Negotiations deteriorated. Who was to blame for what is hard to parse. Cooper decided to helm Call Her Daddy alone and Franklyn started her own show a few months later. Each woman has shared her perspective on her own podcast. But both have said that certain men wanted cuts of what they, as two women, had created together. “We were huge, but that drama just blew it the f-ck up in a way that I can’t even explain,” Franklyn said in a recent interview on the YouTube channel No Jumper. The disagreement became so filled with vitriol that Cooper had to ask her fans to stop bullying Franklyn. “I still have things that are lingering from that, and it happened a year ago,” Franklyn went on. For her part, Cooper felt so distrustful of men in the business world after her experience that she now says she wants to hire only women for her Spotify team.

It wasn’t just the falling-out with a friend that upset Cooper but the coverage of their breakup. “We were being deemed bitchy. We were having a ‘catfight.’ And I’m like, This is not a catfight. We’re talking about a multimillion-dollar brand that is on the line,” says Cooper. “If this were two men, that would not be the conversation.”

During the negotiation, Cooper posted a video on YouTube wearing relatively little makeup and explained the business behind the podcast. It went viral. “That YouTube video changed my life,” she says. “Before, people were like, ‘She’s the blond girl who talks about sex.’ When I put out the video, everyone was like, ‘Wait, this girl’s smart. She knows what she’s talking about with IP and trademarks and conversion rates.’”

Anyone who believed Cooper was all sex tales and mirror selfies had failed to recognize that she had, in a sense, been preparing for this job her whole life. She grew up in Pennsylvania with a psychologist mother who often emphasized EQ over IQ and a sports-TV producer father. She was encouraged to voice her feelings and spent much of her childhood with a camera in her hand. She’d type out the lines of The Devil Wears Prada as she watched, then hand out scripts to friends to playact in the basement.

Her love of media actually hampered her sex education. Her private school offered health class as an elective at the same time that it offered a video-production class, and Cooper lobbied the school to let her take the latter. “I never had a sex-ed class ever in my life,” she says. Instead of getting clinical instruction on things like human anatomy and reproduction, she turned to reality shows like Laguna Beach and The Hills to better understand women’s sex lives. It wasn’t until college, when Cooper took her first gender-studies course, that she realized “the thread between all those shows was that the women were the drama, that the women were so emotional.”

She played Division I soccer at Boston University, where she was a film-and-television major. One day, she recalls, a professor pulled her aside. “He said, ‘I just want to be very honest with you: You’re not going to be taken seriously in this industry because of the way you look. So you’re actually going to have to work a little bit harder,’” she says. “It was the first moment in my life where I was like, Should I dye my hair? Should I wear baggy clothes?” But when the same professor asked students to submit silent films anonymously for a class competition, he unwittingly chose hers as the winner.

It was during her sophomore year that Cooper met a Red Sox player she would prefer remain nameless. It was her first serious relationship. He was more than a decade older than her, had just won the World Series, drove a fancy car and had what she describes as “f-ck you money.” “I’m in his penthouse after my last class of the day before [soccer] practice, and all I knew was, ‘I don’t want to lose this.’ It was intoxicating,” she said in a recent episode of the podcast.

Alexandra Cooper has the power to fell dozens of relationships. Just 26 years old, Cooper is arguably the most successful woman in podcasting, drawing on her own experiences with men to dole out sex advice to millions of listeners on her weekly podcast, Call Her Daddy. “In one episode, I was jokingly like, ‘If he does this, break up with him,’” she says. “Then I got hundreds of girls DMing me being like, ‘O.K., I did it,’ and I’m like, ‘Wait, hold on, let’s make sure that’s the right choice for you specifically.’”
[time-brightcove not-tgx=”true”]

Cooper and I are sitting in the lounge of the Greenwich Hotel in New York City. She leans in conspiratorially as she tells the story, while keeping one wary but eager eye on a group of girls in the lobby who have either spotted her by happenstance or tracked her down based on clues from her frequent Instagram Stories. Though she’s the youngest of three, Cooper exudes a big-sister energy that attracts young women—mostly ages 18 to 26, according to her agent—and she cultivates these relationships: between recording sessions in her Los Angeles home, she’s often direct-messaging one of her 2.2 million Instagram followers, who call themselves the Daddy Gang, about their sexual quandaries and romantic woes. Recently, after a listener found out her boyfriend had cheated on her, Cooper advised her what to do in real time: “I’m like, get your stuff, call an Uber, get out of there, go to a friend’s place. I would have loved to have someone do that for me in high school or college.”

It’s that sway with a coveted demographic that recently earned her a $60 million three-year deal with Spotify, according to Variety. A Spotify spokesperson said the streaming service does not confirm contract figures but …read more