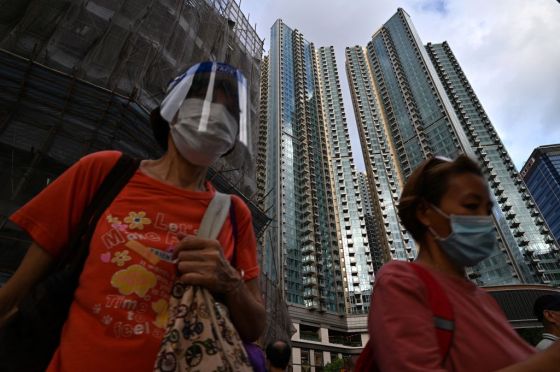 Anthony Wallace—AFP/Getty ImagesPedestrians walk past the Grand Central (R) residential building complex in Hong Kong on May 28, 2021, where a 1.4 million USD (10.8 million HKD) one-bedroom apartment has been offered for a lucky draw’s grand prize for which all Hong Kong residents aged 18 and above who have received both doses of the COVID-19 vaccines will be eligible to register.

Hong Kong isn’t the only place experimenting with giveaways to convince people to get jabbed—several U.S. states are offering lottery prizes, some with

For months, Hong Kong’s leaders have fretted about the city’s low COVID-19 vaccination rates. Despite vaccines being plentiful, free and available to anyone who wants one at a slew community health centers, just 18% of the city’s 7.5 million people chose to get a shot between February and the end of May.

But, there are signs that some of that vaccine hesitancy may be subsiding. In the last three weeks, the average number of people receiving their first COVID-19 shot each day has more than doubled, and the portion of residents with at least one dose has climbed to nearly 22%.
[time-brightcove not-tgx=”true”]

It’s a trend that coincides with two developments.

First, businesses in the Chinese territory began giving away a diverse array of high-end prizes, totaling an estimated $15 million, for residents who get the jab. The offerings include a private party on an Airbus A321neo passenger plane, gold bars worth more than $130,000, a Tesla Model 3 Long Range and, most notably, a $1.4 million apartment—an eye-catching prize in one of the world’s most expensive real estate markets.

The other development is a COVID-19 outbreak involving the more contagious Delta virus variant across the border in the Mainland city of Guangzhou, which authorities are struggling to contain. Some Hong Kong residents have family in Guangzhou, and the cities have strong economic ties, as well.

It’s not clear which impulse is driving more people to vaccination clinics—the chance to win fabulous prizes, or the fear of a new outbreak—but convincing Hongkongers, one of the most hesitant populations in the developed world, to get the COVID-19 vaccine could offer lessons for reaching other vaccine-hesitant communities.