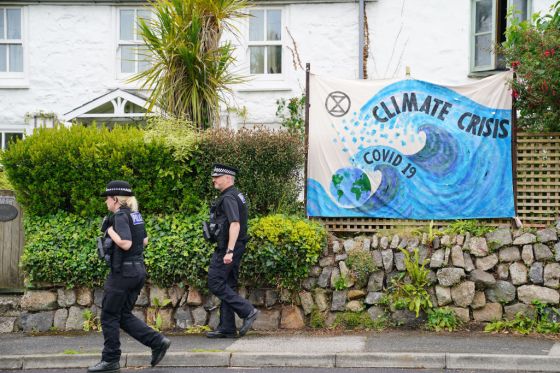 Aaron Chown—PA Wire/PA ImagesPolice officers walk past a banner regarding climate change in Carbis Bay, ahead of the G7 summit in Cornwall. Picture date: Thursday June 10, 2021.

So far, many are wasting that opportunity. Between January 2020 and March 2021, the G7 attendees—which this year also include Australia, India, South Korea and South Africa — together spent $189 billion on fossil fuel projects and just $147 billion on clean forms of energy,

The weather forecast is sunny this weekend in Cornwall, the picturesque corner of southwest England that will host the G7 summit from Friday to Sunday. At first glance, the outlook for the climate at the summit seems unusually bright too, with the world’s seven largest advanced economies promising to create a “greener, more prosperous future” as they recover from COVID-19.

Climate change has finally cemented its place at the top of the agenda for international diplomacy in recent months, and with President Joe Biden in office, all members of the group of seven—the U.S., Italy, France, Germany, the U.K., Canada and Japan—are aligned on the urgency of the current moment for the first time. In a pre-summit gesture in May, the group agreed to end their financing of overseas coal projects—a long-awaited goal that will sharply reduce prospects for the dirtiest fossil fuel.
[time-brightcove not-tgx=”true”]

Crucially, these wealthy countries are not only uniting on similar narratives on climate, but also beginning to see the geopolitical advantage of strong climate action. For the Biden administration, which is trying to pass a raft of pro-climate measures at home, international climate action is a chance to heal the tattered U.S.-E.U. relationship. More broadly, it offers Biden the chance to, as he writes this week in the Washington Post, prove the capacity of “democratic alliances and institutions that shaped so much of the last century against modern-day threats and adversaries.”

The U.K. is also using the climate crisis to its advantage. As host of both the G7 and the high profile U.N. COP26 Climate Summit in November, Prime Minister Boris Johnson has been proudly touting the U.K.’s world-leading goal of reducing its greenhouse gas emissions by 78% in 2035 compared to 1990 levels. In a post-Brexit world, and after early mismanagement of COVID-19, …read more